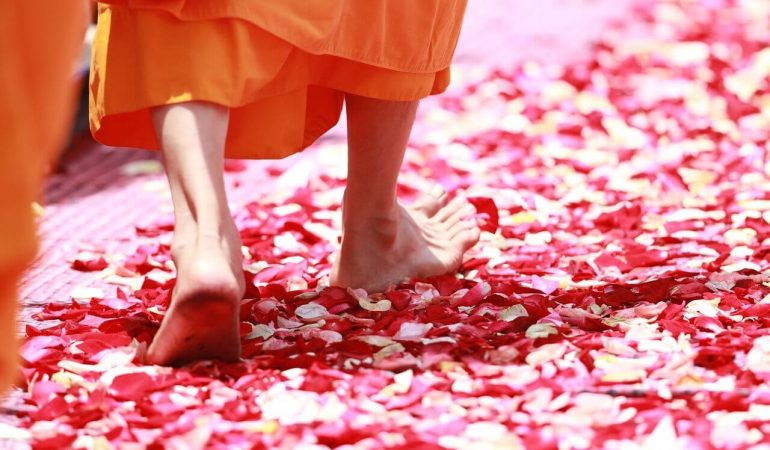 The way that death is understood in Asian religions is quite different from the way Judeo-Christian culture thinks about death. This difference in perspective leads to dramatically different rituals related to death but also to a generalized difference in the way losses are mourned. There are too many differences between Asian cultures and Western cultures to list, but when it comes to mourning and grief, different understandings about how time passes, what happens to the soul after death and how the dead can and do interact with the living mean that death in many Asian cultures and religions is handled differently.

Reincarnation is a cornerstone belief in Hinduism, so after death a soul is expected to either pass to another being, depending on the person’s karma. Most Hindus prefer to die at home, and the body is kept at the home for a viewing after death. The viewing should be held as soon as possible after the death, however, and ideally the body should be cremated within 24 hours after death.

One the one-year anniversary of the death, a special service, called a Shraddha, is held in the family’s home. This service marks the end of the “official” grief period.

There are often two funerals conducted by Buddhist families, the first in the home, two days after the death, and the second one in a temple or funeral home several days later. In some cases, there is also a third service seven days after the death (and usually after cremation, which is most common in Buddhist traditions), to accompany the spirit to the next stage of incarnation.

The formal mourning period for Buddhists is 49 days.

Like Hinduism and Buddhism, reincarnation is a major theme in Taoism, and a death is seen as part of the cycle of reincarnation. Funerals and the rituals that are followed by mourners are seen as a way to help the deceased into the new life as well as to prevent evil spirits from afflicting the survivors. Paper replicas of useful household items are often buried or cremated with the deceased person.

Taoist funerals are also considered dangerous—because evil spirits could follow mourners home, and there are specific rituals mourners should follow to prevent that from happening. There is also specific mourning clothing to wear, depending on the specific relationship to the deceased.

As with in Buddhism, the traditional mourning period is 49 days.

Even for Hindus, Buddhists and Taoists, whose religious traditions encourage focusing on the transition to the next life rather than the end of this life, losing a loved one hurts. Following specific rituals can help move through grief, but many people find they aren’t enough or their grief doesn’t follow the timeline their religion encourages. Professional counseling can help you make sense of and move through your grief while building ways to maintain your connection with your loved one.